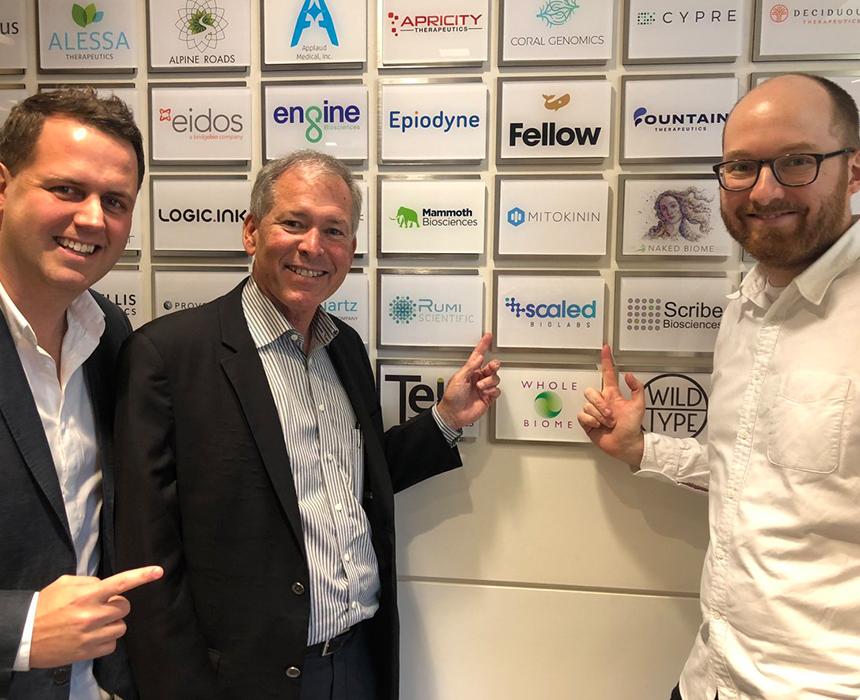 On February 9th, IndieBio will be presenting their newest class in a Demo Day at Herbst Theater in San Francisco. Here’s a sneak peek of what the Class of 2016-2017 of the world’s leading accelerator in synthetic biology and biotechnology has in store:

A2A focuses on novel drugs for antibiotic-resistant bacterial infections, cancer and tuberculosis. The key? Computationally pre-optimized small molecule therapeutics. “A2A Pharmaceuticals was conceived to dramatically speed up and lower the cost of new drug development for cancer and drug resistant bacterial infections” says CEO Edward Painter. “Our success will pave the way to introduction of safer and more effective treatments for the patients who need them.”

A2A’s computational design platform, SCULPT™ (an acronym for Systematic Combinatorial Unification of fragments into Libraries against a Pharmacological Target) integrates experimentally determined target characteristics into the construction of candidates. For oncology, the platform enables the design of ligands for protein-protein interaction inhibitors, key for a wide range of cancer types. For antibiotics, the platform was modified in order to yield candidates with “antibiotic-like” properties, which were selected based on their broad spectrum applicability to gram-negative bacteria. And the company is already thinking further, even working on an undisclosed Leukemia target. Painter is set on driving pharma forward from all sides: “Application of our proprietary fragment-based computational process to other therapeutic areas like rare diseases could have a very important effect on new drug development across the pharmaceutical industry.”

Biological-based information storage. That is Catalog Technologies’ impressive promise: the company aims to encode full data centers into the palm of your hand, moving from digitized to “biologicalized” information.

The jump from transistor to nucleic acid not only makes information storage smaller, but also longer lasting and even greener. Hyunjun Park, Catalog’s CEO, says this next step of data evolution might just be what saves us from the impending datapocalypse: “DNA is extremely long-lasting. This means that once we encode information into DNA for archival purposes, we do not have to worry about copying it over to fresh hard drives or magnetic tapes every so often to make sure the data is retained. Also, it is incredibly information-dense meaning we won’t need to build huge power-hungry facilities to store immense amounts of data. This translates to a much smaller environmental footprint than conventional methods.”

The bio-punk future this technology envisions has not been the easiest story to tell. Says Park: “When we tell people that we store digital information in DNA molecules, we often get an uneasy, “Whose DNA are you using?” back. I think this illustrates a need for greater public outreach surrounding biotechnology in general, as well as one for efforts to address the underlying fear associated with synthetic biology. For the record, we use synthetic DNA molecules, that are not from any living organism.”

It’s always great to see a fellow countryman flying the Chilean flag in Silicon Valley. Leonardo Álvarez, Gea Enzyme’s CEO, says taking part of IndieBio’s program has been key to accelerating GEA’s development: designer proteins created through the identification and manipulation of specific enzyme activity. “San Francisco is the best place to scale an early stage biotech company because it has a sophisticated ecosystem that allows CEOs to interact with big players in the industry” says Álvarez. “Just in four months our company has been able to place deals with multinational companies in the food and Pharma industry, all this would be impossible without the IndieBio support.”

GEA is currently focused on making enzymes for the food industry that reduce saturated fat levels while maintaining aroma, taste and feel. Their main technology is a proprietary bioinformatics platform that allows the team to design proteins and enzymes. Álvarez points out that the team has “successfully designed a set of enzymes that allow us to turn saturated fats into unsaturated fats, this has a huge potential in the food industry.” The company’s “designer proteins” could also be created to bind with high affinity and specificity to any desired target, from small organic molecules to big protein complexes, broadening the scope of GEA’s technology from food to pharma.

Over 16 million patients are diagnosed with major depressive disorders every year in the US. More than 4 million remain drug-resistant, that is, they do not get satisfactory results from drugs in the first line of therapy. This is the bleary diagnosis that made Mehran Talebinejad found NeuroQore. Fascinated by brain machine interfaces since he was a teenager, Talebinejad realized the complexity of the brain’s machinery after his first brain surgery. “I also realized non-invasive brain tools and neuromodulation is super important while we don’t have easy access to the brain and skull is blocking us!” The gold standard for drug-resistant depression treatment is Electroconvulsive therapy (ECT) or electroshock therapy, which requires hospitalization, anesthesia, has severe cognitive effects and a risk of death. No wonder less than 1% of patients are even willing to endure it.

NeuroQuore aims to bring another option to the table. The company is commercializing a new repetitive transcranial magnetic stimulation (rTMS) therapy system for treatment of depression and a range of other psychiatric and neurological disorders. This therapy does not require anesthesia or has known cognitive side effects. The company will set up four centers in the US this year and has already forged partnerships to set up hundreds of offices across the US and worldwide in the next few years, aiming to provide treatment for depression to everyone. Says Talebinejad, “Effective treatment for depression helps get more patients into remission faster and improves quality of lives (both for patients and their loved ones) while removing depression stigma. This will ultimately, bring back lost productivity and loss revenue.”

In a society that still gets queasy over transgenics, Ravata’s bold statement stands up on its own: Transforming hundreds of embryos at the push of a button. The company seeks to scale transgenics by improving and automating embryo transformation. Their device, with demos scheduled for mid-year, promises up to 1,000 embryo transformations per hour, over 80% viability and over 80% efficiency. Ravata is currently focused on genetically altering animal embryos for medical research, but founder Arshia Firouzi is already thinking bigger. “Our technology can be used on any cell,” says Firouzi “we are excited to reach our vision of fighting genetic disease by transforming human cells.”

The development behind the dream is moving fast and steady. The company incorporated in late 2016 and entered IndieBio almost right away. Says Firouzi: “The network, encouragement, and community of IndieBio has enabled us to go from an idea on paper to a functioning minimum-viable-product in just 4 months.” With the speed Ravata is moving forward, they might even reach their impressively ambitious goal: Putting their device in the market by late 2017.

How much time have you spent inside a cell culture hood in your laboratory, in total? Founder Drew Titmarsh says he’s spent probably a full year of his working life (out of 10) inside of it. “This is not where our best trained scientists are meant to be.” Says Titmarsh. “So, we decided to condense thousands of lab experiments onto a credit-card sized system, freeing scientists from the bench and giving them much higher payoff for their experimental efforts, both in terms of amount and quality of data.

Under this premise, Scaled Biolabs was born. The company promises higher throughput, increased efficiency and lower costs. Their system is miniaturized using microfluidics, lowering material requirements to barely 1/10th and optimizing current bottlenecks for cellular and biologics productions from months to hours. This translates into cheaper and faster discoveries.

The technology has already been proven in human tissue for regenerative medicine. “Our academic collaborators used our technology to help discover how to grow human kidney tissue in a dish. Moving forward in 2017, we’re helping customers grow other tissue types for curing serious diseases”.

Remember to check out IndieBio’s Demo Day on Feb 9th to check the incubator’s latest generation.